This was originally published on July 9, 2013 by the Society for U.S. Intellectual History, and can be viewed in its original format here: https://s-usih.org/2013/07/english-to-go/&nbsp;

Spending the spring semester teaching in Rome, I felt very spoiled.  Not only was I teaching the history of my country in my native language, but also, I kept bumping into English words on the street.  The globalization of English includes not only more people speaking this language of British Empire and American influence, but also more people using English words in the everyday speech of their home country.  Ecco Roma.

Especially for conveying things fast and hip and most especially, things for sale, many signs in Italy’s capital include a few bold English words for punchy impact.  This is a little surprising since most Italians do not speak English very well, although that does vary by generation, with young people generally having more command of the language.  Asking for directions in the Metro subway offered an example: using the best Italian I could muster, I asked an older man, “mi scusi, dov’è linea B? [excuse me, where is line B?]” and he just said, “non parlo inglese”; he wouldn’t even stoop to my English-accented Italian.  Then a young person nearby seemed very proud to be able to answer my question, though in very basic English.  The English on the streets speaks to Italian aspirations for learning English and enjoying American culture, and to some extent British culture too, most notably with the continued popularity of the Beatles.

Some of the English in Italy is associated with the American Western frontier, which has a more powerful appeal here than in the present-day US.  The Marlboro Man still rides on posters, and an ad for sunglasses shows two men in action during a rodeo with a bull coming at them; they look ready for action in their shades, and the caption reads simply “Never hide.”  With a picture of the open range in the background, a car ad declares “Life is an open road.”  Another car ad sells both “Motion and emotion,” while another challenges prospective buys to “Start something more than a car.”

English seems to be the vehicle of choice for conveying anything energetic.  A phone company promises “Power to you,” but the fine print in Italian specifies the amount of money to them.  A photography school is looking for students, but specifies that study there “Requires passion.”  There’s a bar called the “150mph Club,” and once I found my way on the subway lines, I caught a glimpse of graffiti on a train car that summed up this theme: “Life is Fast.”

English also provides the words to use for things trendy and cool.  There is a pizza parlor called “Retro,” and an image at a shoe store of a sultry young woman biting on a sneaker seductively because, well, “It’s a sneaker thing.”  Another ad displaying a beautiful woman as a “Dior Addict,” was not to promote rehab clinics; instead, the caption told the story: “Be Iconic”; but the sheers numbers of this iconic woman and the prospect of big sales to women who then might all look like her made me think that the caption should read “Be Cloned.”  A poster of a woman modeling jewelry displays the unusual combination, “Virtuous-Sensuous,” with more of the latter on display; the jewelry company is acknowledging the power of goodness and beauty, and now just needs to reckon with the true.

English is used most for selling things.  There are signs that invite “Smart shopping,” that offer a “Special price for a special customer,” that tempt with “Must-haves for everyday,” or that simply blurt out “Think trench.”  And the clothing stores feature a “New collection,” “Fashion in the air,” or outfits with a “Sensual fit.”  Some of the English is so thoroughly incorporated that the signs seamlessly mix the two languages, such as the store that’s a “Shopping casa,” and another one selling “Scarpe [shoes]—to go!”  There is enough comprehension of English to allow even for some intentional misspelling for effect; one store invites each shopper to “Be yourslef”—freed even from the conventions of spelling!

Tee-shirts seem to be the place to blurt out something American, but sometimes without a clear meaning.  In addition to the authentic college logos, there was one that looks at a distance like the circular seal of an American college, but close up, it reads, literally, “City, State University”—that generic American college thing.  One shirt states “Box—New—Fun” (still trying to figure that one out), and another declares “No alcohol.  Yes love.  Happiness.”  One other shirt may be a clue about Italian environmentalism; it reads “Save the planet—it’s the only one with chocolate.”  That is actually the color of the Tiber River running through the center of the city, and the branches of the trees on its banks are full of debris that the trees have caught at high water—trees as filters!  But apparently the river is not too far gone since sea gulls and human fishers still work the river.

Many of the signs in English combine their goal of sales promotion with slightly off-tune use of the language to make for downright charming phrases.  A sign for discounted prices reads “Happy price—make your life happy,” and another store boasts “All-inclusive big.”  There is a sign for “Juice shoes,” which may explain what that sultry sneaker woman was going for.  One fashion boutique boasts simply “So style,” and a massage parlor at the airport sits under a sign that states “Be relax.”  But my favorite is the sign on a trash can at an ice cream parlor that asks customers to “Share happy with planet.”

These displays of English on Roman streets show recent chapters of the spread of English, and they also show how American culture is perceived in Italy.  Advertisements are the texts of maximum transparency; in their urgency to sell, they use words bluntly—with meanings … to go!  English offers many of the words of choice, especially when the message is high fashion or high speed.  This medium may not be the message that all Americans have of their own culture, but that is the message that Italians are finding and seeking out about American culture.

I found confirmation of this street reputation of American culture when I asked my students about their impressions of the United States.  They referred to intensity and efficiency, to abundance and an easier life, but they also referred to opportunities and the capacity for personal reinvention.  American culture may often seem to be one grand commercial bazaar and awash in a politics of paralyzing gridlock, but it also possesses at its core a setting for new possibilities that may be the nation’s most enduring product.  And if anyone doubts that democratic potential in the USA, just ask anyone on the street in Rome. 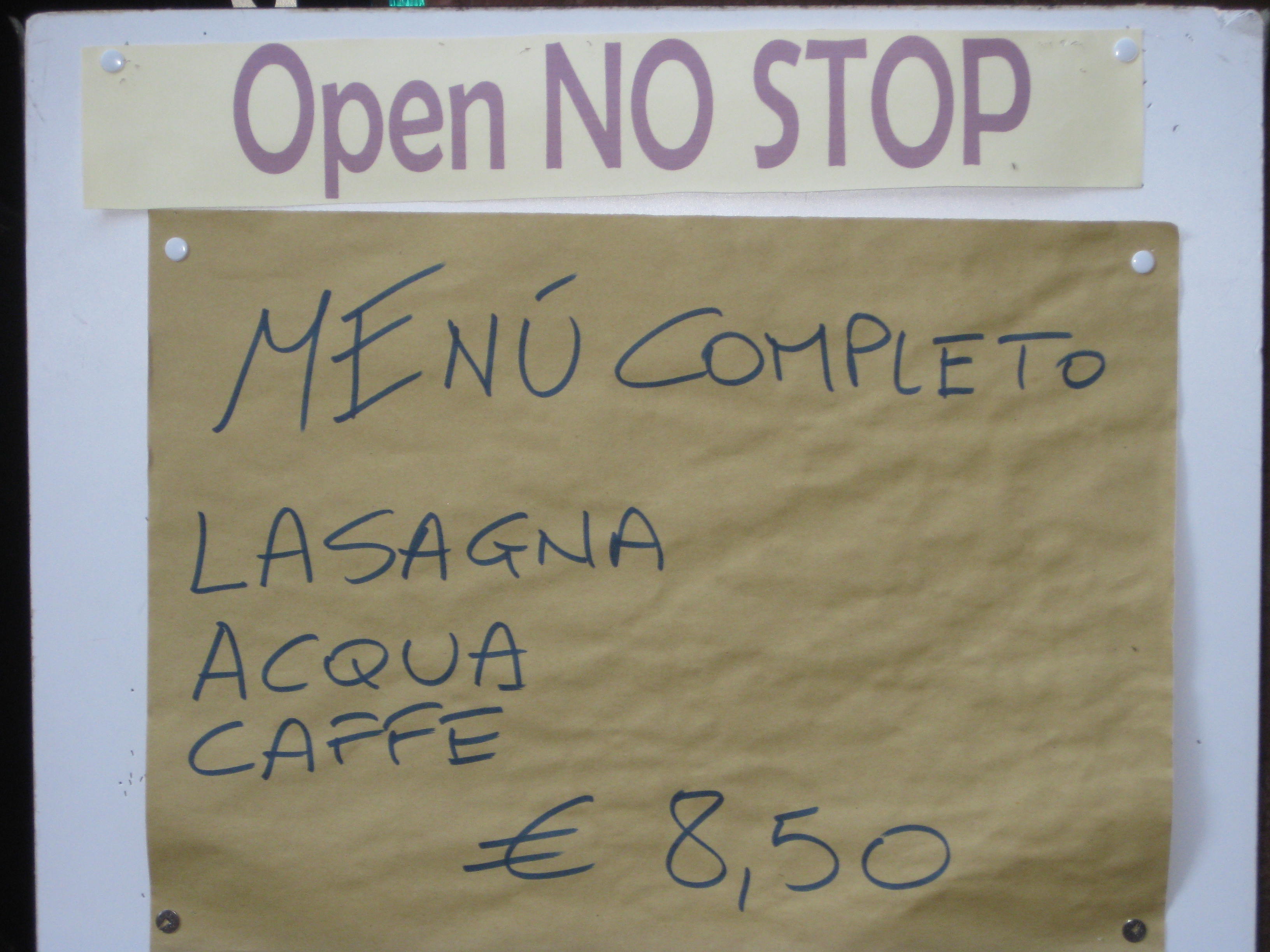